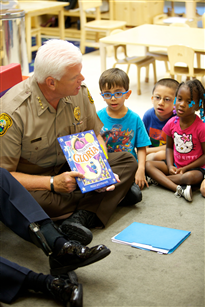 New research findings published in the prestigious journal Science strengthen the argument that high-quality early education can reduce crime. A follow-up at age 28 of over 1,400 low-income children in Chicago found that those who did not attend the Child-Parent Center preschools were 27 percent more likely to have a felony arrest by age 26 and were 39 percent more likely to have spent time in jail.

As Congress and the Administration consider steps to keep the country solvent, law enforcement leaders are urging them to maintain flexibility to protect or even increase funding for vital programs such as high-quality early care and education. Some automatic budget mechanisms under discussion, such as spending caps, could make that impossible and have devastating effects on funding for these programs. Director Loftus and Chief Hernandez urged all members of the Florida Congressional Delegation, including Senators Bill Nelson and Marco Rubio, to ensure that this does not happen.

“Early education is one of the first opportunities to work toward our crime prevention goals. Kids benefit from a strong introduction to learning, and we all benefit by making sure communities are safe in the future,” Chief Hernandez said.

Congress also has the opportunity to improve these programs through the reauthorization of the Elementary and Secondary Education Act and other education initiatives that will help states to improve and increase access to high-quality early education. Law enforcement leaders are calling on Congress to support a shift from the current “K-12” system to a model that focuses on early education to high school graduation.

About the United Way Center for Excellence in Early Education: The Center is an innovative learning, teaching, and training initiative dedicated to elevating the quality of early care and education in Miami-Dade and beyond. The Center models proven best practices, and shares those practices with adult learners including parents, educators, and child care providers.

Miami law enforcement leaders today called on state and federal lawmakers to support funding for high-quality early education as a critical strategy to reduce crime, lower prison costs and save taxpayers money. They noted that Florida taxpayers spend more than $2 billion a year on corrections—a figure that could be reduced by offering more at-risk kids high-quality early education opportunities.

Miami-Dade Police Director James Loftus and North Miami Beach Chief Rafael Hernandez signaled their support for early learning during a visit to the United Way Center for Excellence in Early Education on Wednesday to read to children in the early learning program and discuss the value of early childhood education. They are members of the anti-crime organization FIGHT CRIME: INVEST IN KIDS, which sponsored the event as part of a nationwide law enforcement campaign promoting high-quality early childhood education.

The leaders released a new research report from FIGHT CRIME: INVEST IN KIDS called “Pay Now or Pay Much More Later” showing that high-quality early care and education can help at-risk children succeed and significantly reduce the likelihood that they will commit crimes. The report shows that this investment saves taxpayers on the back end from reduced corrections costs.

Despite some drops in local crime rates, Florida still spent $2.4 billion in 2010-11 on corrections with over 100,000 adults locked up in either state or federal prisons, as of the first day of 2010. According to the U.S. Department of Justice and the Census Bureau, Florida’s corrections spending increased by 500 percent between 1982 and 2008.

“Law enforcement needs to use every tool possible to combat crime and keep our streets safe. Early learning initiatives can’t close an investigation or catch a fugitive, but we know the best way to fight crime is to nip it in the bud,” Director Loftus said. “High-quality early education for at-risk kids is one of the best uses of taxpayer dollars available and helps us make communities safer places to live, work and raise a family.”

Cutting funding for early childhood programs would be shortsighted and risky, the group said, since quality early care and education programs actually save money in the long run. The Perry Preschool Program cut crime, welfare and other costs so much that it saved taxpayers an average of $180,000 for every child served, with the vast majority of the public savings coming from reduced crime costs alone.