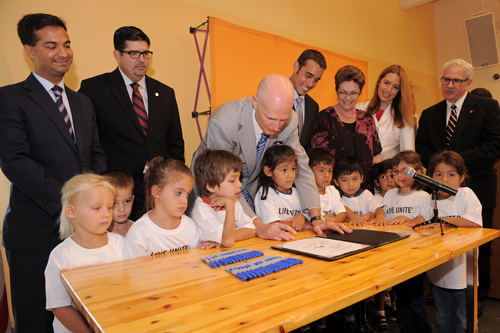 On Monday, August 19, 2013, Governor Rick Scott participated in a ceremonial signing of House Bill 7165 that restructures the state’s early learning system. The Governor held the ceremonial bill signing at the United Way Center for Excellence in Early Education in Miami.

Governor Scott said, “This bill will prioritize early learning education by moving many of its functions into the Department of Education, which will increase accountability and transparency for early learning programs.”

“We were thrilled to host Governor Scott at our nationally-recognized United Way Center for Excellence in Early Education for this important bill signing,” Harve A. Mogul, president and CEO, United Way of Miami-Dade, said.  “Elevating the quality of early education for all children everywhere is a top priority of our United Way.  We advocated for the passage of HB 7165 as it is a critical step in improving our early education system and we applaud the Governor for his commitment.”
Florida Office of Early Learning Executive Director Shan Goff said, “The Governor has demonstrated his commitment to early learning through his budget and this legislation. High quality early learning opportunities are important for our children and families in our state.”

Former State Senator and Executive Director of the Florida Association for Child Care Management Ellyn Bogdanoff said, “Providers are ecstatic that early learning received an increase in funding for the first time in 10 years. This will allow our centers to serve many more children, affording our families the opportunity to continue employment. There is a tremendous need throughout Florida and we can’t thank the governor and the legislature enough for this important step.”

Senator John Legg said, “The Governor has delivered on his commitment to education by investing an additional $5 million in early education. This bill will also increase accountability and transparency for how early education programs operate, so we can do more for our children.”
Representative Marlene O’Toole said, “I want to thank Governor Scott for signing this critical legislation. All of the interested parties made this legislation possible, and we will now be more effective in how early childhood education services are offered thanks to this law.”

Board President of the Child Development Educational Alliance Ellen McKinley said, “It is good news that providers will be getting additional funds for the first time in 10 years. This will help more families in need. And everyone benefits from funding for T.E.A.C.H. scholarships – teachers, parents and children. We appreciate the governor’s support for early learning.”

President of the Alliance for Early Care and Education Linda Carmona-Sanchez said, “There’s no wiser investment than in Florida’s early learning programs. Not only do they enable working families to be financially self-sufficient, but they help children begin a lifetime of academic success. We thank Governor Scott for his continued commitment to Florida’s youngest citizens.”

Executive Director of the Early Learning Coalition of Marion County Roseann Fricks, who also chairs the statewide Association of Early Learning Coalitions, said, “This is a clear indication of the important role early learning coalitions play in education and employment. Restoring funding lost last year for the first increase in provider funding in ten years is a significant move. We thank the governor and the legislature for their support.”

President of the United Way of Florida Ted Granger said, “This turned out to be a very good year for children. With a stronger state economy, Governor Scott knew that investing more in education will make a positive difference. Early learning is where education begins. Programs that were really struggling to serve children and families in the state will be helped.”

Chair of The Children’s Movement of Florida David Lawrence, Jr. said, “The early years when 90 percent of brain growth occurs are crucial to growing children who become eager students and contributing adults. The governor’s support for early learning is encouraging – and progress is being made – and my fullest hope is that this would be just the first step in our state making an even more serious investment in children’s early years. We still have a considerable distance to travel for any ‘promised land’ for children.”

When Governor Scott signed the Florida Families First budget, he continued his commitment to early learning—a state educational program that supports his two major priorities—jobs and education. Funding for early learning of more than $1 billion included an additional amount of $5 million for school readiness—the first increase in funds for early learning coalitions in ten years.