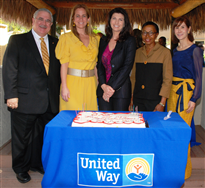 Business and community leaders, national child advocates and United Way of Miami-Dade staff and volunteers gathered at the United Way Center for Excellence in Early Education to celebrate its fifth year anniversary on Feb. 15. Over the last five years, the Center has worked with thousands of parents, educators and child care providers, countless community partners and dozens of institutions and organizations to raise the standards of early care and education in Miami-Dade and beyond.

The festivities took place in the Center’s playground, where United Way board chair Jayne Abess, Center committee co-chair Toni Randolph and United Way president and CEO Harve Mogul, welcomed guests, celebrated partnerships and revisited many of the Center’s accomplishments. Representatives for Mayor Carlos Gimenez and Mayor Tomas Regalado presented the Center with city and county proclamations, for its work to ensure that children have access to the highest quality early care and education.

“Let there be no doubt that what we started five years ago is making a difference in the way we care for and educate our children – here in our community and at the national level,” said Mogul. “Our work is far reaching; we are focused on changing the system by garnering the support from champions of early education to ensure that all children have the best possible start in school and in life.”

Guest speakers, including Bela Moté, of Educare Learning Network, praised the Center and its staff for their innovative work with adults and children, particularly for the successful dual language program, an asset that sets the Center apart from other prestigious Educare centers in the United States. Guests also heard from Claudia Uribe, a local preschool owner, who spoke of the invaluable professional development training she received at the Center, and from several parents whose families have been changed, because their children received care and inspiration from the staff of the Center’s Demonstration School.

As the morning came to a close, children from the School sang “Twinkle, Twinkle Little Star” in four languages to emphasize the importance of dual language acquisition and diversity and blew out candles on three celebratory cakes.