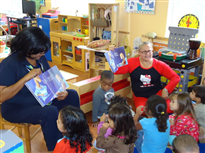 United Way of Miami-Dade, its partner early learning centers and Miami-Dade County Public Schools are took part in Jumpstart’s Read for the Record©, a world-record-breaking campaign that brought together children and adults to read the same book, on the same day. On October 6, adults all over the nation read the official campaign book, Llama Llama Red Pajama by Anna Dewdney, to more than two million children.

The national reading campaign was presented in partnership with the Pearson Foundation.

Locally, United Way rallied 100 volunteers who read with 85 pre-k and kindergarten classrooms throughout the county, including six pre-K classes at the United Way Center for Excellence in Early Education.

Celebrating its sixth year, Jumpstart’s Read for the Record harnesses the power of reading by bringing together children and adults to read the same book, on the same day to focus attention on early literacy.

After the readings, many volunteers left messages and shared their photos at www.facebook.com/unitedwaymiami

United Way encourages all adults to read to young children and encourage a lifetime love for learning. To learn more about United Way’s Volunteer Reader Program or for tips on how to read to children, please visit http://www.unitedwaymiami.org/readingpals.